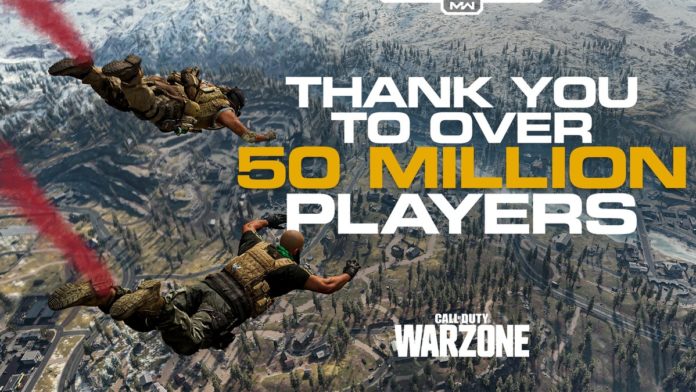 Launched back on March 10th, Call of Duty: Warzone has been a huge success for Activision and Infinity Ward.

In only a month, Warzone has hit 50 million players as announced in their official twitter account. This makes Warzone one of the fastest-growing titles in the gaming industry.

Call of Duty: Warzone just received its Season 3 update on April 8th, which introduced a new quads playlist, lots of balancing changes and much more:

During the season, expect to see more modes and playlists that change the loot pool to specific weapon types, and high action modes such as ‘Scopes and Scatter Guns’ (only sniper rifles & shotguns), in addition to other surprises.

Furthermore, ground loot will have a continuous overhaul to diversify the strategies you can take across Warzone. Of note, expect to see every weapon type with a silenced and non-silenced variant, allowing squads to kit themselves for silent operations… or for that final “guns blazing” shootout at the end of a Battle Royale.

Like additional playlists, be on the lookout for the introduction of new weapons and blueprints in Supply Boxes and ground loot to Verdansk and stay tuned for additional meta updates as the Warzone further evolves.

Recently, the Call of Duty website was updated for the release of season 3 of Modern Warfare and Warzone, which showed the “NEW MODES” coming this season. The image showed that Warzone would be getting the new Quads mode and a new Duos mode in the middle of season 3.

Since then the image has been removed from the website and Infinity Ward has not yet announced any new mode publicly. But we can predict that it is coming sooner or later.

Players are Upset with the Current State of Snipers in Warzone...