The STG44 is an assault rifle added to Call of Duty: Warzone with Vanguard. It is one of the best Assault Rifles in the game right now. Here’s an in-depth guide on choosing the best loadout for STG44 in Warzone Season 5 Last Stand Reloaded.

The STG44 is operator Ronald’s favorite weapon. It is a popular choice for players in the Vanguard multiplayer, especially in the Search and Destroys game mode. It is an excellent option for players looking to break into the Warzone meta.

STG44 has an excellent damage output and accuracy. It can be the primary assault rifle or sniper support in a loadout. Moreover, the STG44 checks every requirement of an immaculate assault rifle that is viable at all distances in a gunfight. The STG44 is Vanguard’s strongest Assault Rifle and is unrivaled for its overall stats.

All weapons from Vanguard come with ten attachment slots. With these ten slots at hand, the STG44 can be transformed into a long-range beamer or mid to close-range combat weapon. In the new map “Caldera” and Rebirth Island, mid to long-range assault rifles have been the choice of players. With Rebirth Island offering a lot of cover for taking long-range gunfights, STG44 will do wonders with the proper build.

How to unlock the STG44 in CoD Warzone

The STG44 is part of Call of Duty: Vanguard’s weapon pool. This Assault Rifle (A.R.) is an unlockable weapon available after reaching level 1. It is part of the post-launch weapon line available to all players from day one.

There are no challenges to unlocking the STG44; players simply logging in to the game for the first time would be able to use it in their loadout. However, all the attachments would be unavailable without leveling up the weapon.

Unlocking this weapon might not be a problem, but newer Assault Rifles are locked behind challenges and are available to players when the challenges are correctly completed. Even though it is a starting weapon, it is undoubtedly one of the best assault rifles in the game.

MX Silencer functions like the Monolithic Suppressor of Modern Warfare. It essentially increases damage range and adds noise suppression to firing sound. Suppression while firing helps remain undetected in the initial stage of a gunfight.

After the nerf to Incendiary rounds, Lengthened is the go-to ammunition. It provides added bullet velocity. Lengthened is both suited for sub-machine guns and assault rifles. 8mm Kurz 60 Round Drum is a 60 round magazine; it allows players not constantly to reload in a gunfight with the added bullet count.

As for the perks, Nerves of Steel helps maintain aiming stability and sway while sustaining fire from enemies, with Fully Loaded providing the maximum ammunition when the loadout is equipped.

Overkill as the second perk is a must; players can carry an extra primary weapon in the secondary slot. Pairing MP40 or Kar98k with this A.R. will make the loadout more potent, and the secondary will help handle both long to mid-distance gunfights with ease. Our MP40 loadout focuses on a close-range S.M.G. build.

As for tactical, stim gives an instant health regeneration upon use. Heartbeat sensor can help track other players roaming nearby and plan the next gunfight strategy. Throwing knives as lethal can be a backup in a close gunfight; it has a one-shot potential on players with a minimal level of armor. Moreover, after downing a player, immediately throwing a knife will eliminate the player regardless of the range it’s thrown from. Proximity mine can be opted out for throwing knives to watch flank when stationary; it damages players and vehicles.

All the latest STG44 Buffs & Nerfs

The STG44 has finally been nerfed with the start of Season 4 Mercenaries of Fortune. It finally dethrones STG44 as the best A.R. in Warzone since the Vanguard integration. Here’s a list of all the attachments that were nerfed:

Other Alternatives to the STG44 in the Current Meta

Other alternatives to STG44 in the current meta is Cooper Carbine (Vanguard) and Vargo 52 (BOCW). Vargo 52 is a full auto Assault Rifle; it is a long-range beamer and, in the same way, also performs as a mid-range support weapon. Cooper Carbine is also a solid choice with a high fire rate, and it has a very low time to kill in mid to long-range gunfights. Check out our loadout builds for both guns to create a dominating loadout. 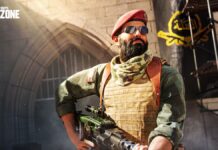