The FSS Hurricane is a modded SMG on the M4 platform. It is similar to M13 from MW (2019). The SMG has a vicious fire rate, making it a powerful weapon for close-range gunfights. Furthermore, for its Assault Rifle platform, it can handle long-range engagements in most cases.

The FSS Hurricane has an erratic recoil pattern. However, the recoil can be easily managed using the proper build in-game. With suitable attachments, the weapon can obtain super fast TTK, which makes melting opponents during a gunfight a walk in the park.

How to unlock the FSS Hurricane in MW2

The FSS Hurricane is available from when players reach level 13 using the FTAC Recon from the M4 platform in CoD: MW2 for the first time, but that doesn’t ensure every attachment is unlocked. Players will have to level up their rank with the FSS Hurricane to unlock some of the better attachments for the weapon.

To rank up a weapon, spend time in MW2 with it equipped. While the FSS Hurricane will always gain a constant flow of XP while equipped, players can speed up the process by using it to slay enemies, take down killstreaks, and complete objectives. And they will gain even more weapon XP for the FSS Hurricane if they activate a weapon-oriented XP token before an MW2 match begins.

As for the reworked perk system, the base perks 1 and 2 are tracker and battle-hardened. The tracker perk highlights the enemy’s footsteps and battle-hardened increases damage resistance to explosives in-game. On the other hand, the fast hands’ bonus perk increases the weapon switching and reload speed.

Other Alternatives to the FSS Hurricane in the Current Meta

Other alternatives to the FSS Hurricane are MP5 and Kastov74u. However, there are other assault rifles in the game, but they are currently unavailable. So, the best alternative for this weapon can be determined when the game gets an entire release.

Read More: NICKMERCS Thinks Slide Canceling is “Ridiculous” and is Happy About its Absence in Modern Warfare 2 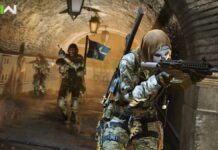