Best Free Racing Games 2021: Ranking all the Games from Worst to Best 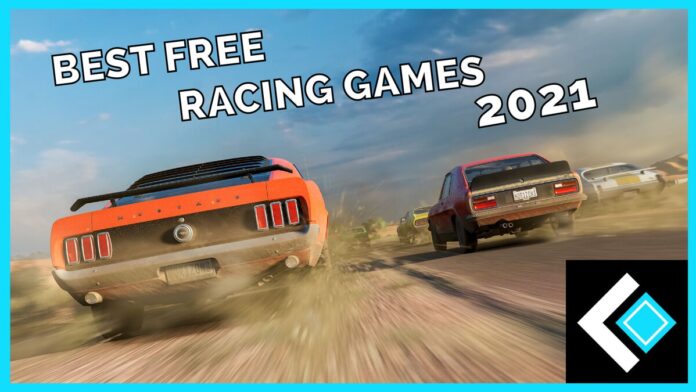 Here we will be listing down some of the best sim Racing Games you can play for FREE on PC and Android devices in 2021.

While games can be quite expensive at times, that doesn’t mean that gamers on a budget have to miss out on everything good that the videogame industry has to offer. We are here to bring you the best FREE Racing games currently available on PC and Android. If you are a fan of racing sims, then you would definitely want to try out these games.

Take a look at the best racing games you can get on Steam for FREE.

While Inertial Drift itself is $8.99 USD on Steam, Inertial Drift Sunset Prologue is absolutely free for grabs. The game is set in a 90’s retro-future and offers much more than a simple demo would. You will get two race tracks: Lakeside Loop and Sunset Sea Circuit. Moreover, you can also race around the tracks using two different cars and aim to beat your best times. Furthermore, the graphics are also quite good for a free game, and the sceneries will leave you wanting more!

Drive through the training ride on the streets of Warsaw, the neon version of Syrena Sport. Explore East Berlin embedded in Neon lights in iconic cars that are super fast, unique, and classic. In Electro Ride Prologue, the first routes of the full version ($6.49 USD) of the game and a Quick Race mode will be available to you. There are three difficulty levels to choose from, and you’ll be racing against 12 cars each time.

Indulge in this premier free-to-play racing simulation on PC, where you will be able to choose from 12 different cars and 5 race tracks. However, the game will take a whopping 40 GB of free space. But that is largely due to the amount of content this free game offers. RaceRoom Racing Experience is a sim racing game in its truest sense that is made for hardcore sim racing fans. Using a racing wheel is highly recommended for enjoying this game.

Trackmania: Nations Forever is a free game in the truest sense of the word. The game offers a range of services with ZERO paid content. The game offers both Solo and Multiplayer modes that you can play with friends. Not only that, the game has a solid 65 different tracks that are all progressively challenging. The game came out in 2008. And despite being a relatively old game, it offers engaging multiplayer races and interactivity between players.

Drive legendary classic rides from the 70s and 80s in T-Bull’s Racing Classics: Drag Race Simulator. You will be able to test the original performance of these cars in a classic head-to-head drag race. Not only that, you will be able to upgrade your vintage cars and increase their speed as you progress. Players can choose from 16 different cars and 45 stages in story mode. Moreover, the game does not require a high-end PC as it only requires 200MB of free storage.

Project Torque is one of the best free-to-play MMO racing games you can play. Although this too can be played on a potato PC, it requires 10GB of free space. You can drive around the race tracks of Germany, or the Hungarian and Mexican off-road tracks, in the English countryside, on the rooftops of Shanghai, and more. The game allows you to race against players around the world and interact with them through in-game chat and friend-list.

Rekt: Crash Test is a high-octane and stunt arcade game that lets players perform highly addictive combos and tricks. Set in a retro arena, the game offers various challenges with plenty of room for customization. Players can also unlock new cars and arenas as they progress. Moreover, the game has a solid multiplayer mode with an active player base of 170,000 people.

A game that follows similar principles as World of Tanks, Engine Evolution is a multiplayer bike racing game. It allows players to compete against 11 other players in each race. Players earn experience and credits after each match, which can be used to upgrade their bikes or unlock new models. The player will start off with a 1906 model but can slowly upgrade to modern-day bikes, which requires substantial grinding.

Although each of these games offers more features than one could possibly ask for in free sim racing, Project Torque, and Trackmania surely stand as our top picks. Despite being around for over a decade, both Project Torque and Trackmania continue to deliver an abundance of content for a fleshed-out racing experience. Moreover, both games have multiplayer modes to be played with friends.

Take a look at some of the best free racing games available in Google PlayStore:

Players can expect an immersive racing experience from Asphalt 9: Legends. The game has realistic graphics, a Career Mode with 60 seasons, and 900 events. Moreover, it also has a 7-player multiplayer mode and car customization options.

The game has over 500 million downloads on Google PlayStore, featuring 40 race tracks at 19 real-world locations, a 43-car grid, and over 250 meticulously detailed cars. While the game does contain in-game purchases, it can be disabled manually.

Need for Speed: No Limits

Providing a similar feel to the world-famous Need for Speed: Most Wanted, No Limits brings the players the opportunity to drive cars of Bugatti, Lamborghini, McLaren, Hennessey, and more. Players can customize their rides and enjoy up to 1,000 challenging races. However, the game does have pop-up advertisements.

Forza Street brings a race-on-the-go Forza experience to your android devices. Enjoy 3D visuals bring the action to life while competing in various races and upgrading your vehicles. Players can rank up the game’s leaderboards by beating their personal records. The game also has a 1v1 mode to play with a friend. Although free-to-play, the game contains in-app purchases.

Asphalt 9: Legends, which is the successor of the famous Asphalt 8, takes the lead as the best free-to-play racing game for Android. Players can churn through hours of content and even play multiplayer. Rebel Racing and Real Racing 3 also come close in terms of content, customization, and gameplay.

Kena: Bridge of Spirits All The Boss Fights In The Game

Fortnite Leak hints at the Zero Point Returning to the Island

All the error codes and their meaning in Apex Legends 2021